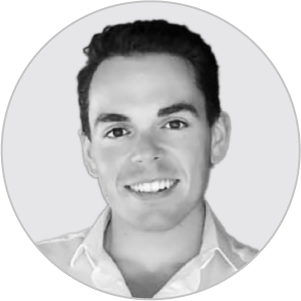 Lukas Lange is an expert in genomics and the CEO of Probably Genetic, which he founded together with CTO Harley Katz in 2019. Lukas holds a PhD from the University of Oxford, while Harley specializes in big data and machine learning, holding a PhD from the University of Cambridge. Calm/Storm invested in the company alongsideYCombinator, Khosla Ventures, TenOneTen Ventures and the Oxford Angel Fund.‍

What’s worse than being ill with a disease? Not knowing why. Lukas Lange specializes in rare genetic diseases and co-founded Probably Genetic to uncover undiagnosed patients who struggle to find out about their medical conditions.

We catch Lukas in San Francisco, having returned from a lockdown in his home country, Austria. It was a rough landing, with a winter storm lashing the Bay Area, and the jet lag is just kicking in. Days of quarantine lie ahead of him. A good opportunity to reflect on where things started and why he be-came a founder.

What is the idea behind Probably Genetic?

Most people don’t understand what it’s like to have an undiagnosed disease. These patients have symptoms; they are ill or severely sick – sometimes with fatal diseases. There might not be a treatment but for them, finding out what they have is an insanely big deal. Being undiagnosed feels like being out in the ocean, caught in a dark storm, drifting without navigation. Getting a diagnosis is like the light house. We felt there weren’t many people leveraging the tools available.

‍“Being undiagnosed with a rare disease feels like being out in the ocean, caught in a dark storm”

How do you make use of these tools?

Genetic diseases are very different. I studied them during my PhD. People often spend a lot of time being sick without knowing what they have –that diagnostic odyssey is brutal. You need to find patients as early as you can, that’s the gist of it.

We first identified people with Autism because very often, that is not the only genetic disease they have. We wouldn’t test someone to tell them that they might have a condition in the future. It’s about taking care of the issues they’re already facing. We used Autism to validate our concept.

‍If it is rare, does it only concern few people?

Ten percent of the population are estimated to have a rare genetic disease. There are around 400 million people worldwide who suffer from one. We uncover a lot of patients who are ill through social media and provide them with a symptom-checker on our website. There are even social media influencers who advocate on genetic diseases.

Genetic testing is expensive. What is the business model behind your firm?‍

We work with biotechnology companies that have the means to come up with therapies for these conditions but often don’t find enough patients. Our long-term vision is to build consistent datasets on rare diseases that enable the development of treatments and clinical trials. But we must be careful, a lot of founders are blinded by big data sets.

Most people are not aware of what can be done with the data they give away. Genetic data is more sensitive than financial data; it can tell a lot about you and your health.

How did you find your co-founder and CTO at Probably Genetic, Harley Katz?

I met Harley in Cambridge during my Master’s degree in advanced chemical engineering. He was doing his PhD in theoretical astrophysics there. We became friends even before we thought about starting a company. For us as co-founders, mutual trust and friendship are more important than anything else.

Why is that so important?

Founding a company means that change happens very fast and you need people you can trust. The frequency of change is the main difference to previous jobs I had, which hardly ever fulfilled me. Everyone at Probably Genetic could have probably gone into very well-paid jobs but they decided to look beyond that. One of the greatest things about founding your own company is that you can hand-pick the people you work with.