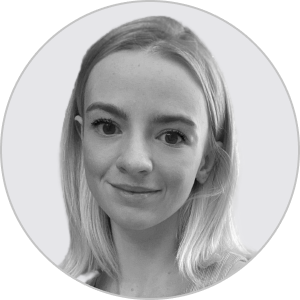 Madison Campbell is the CEO and co-founder of Leda Health. She founded the company in 2019 with Liesel Vaidya, aiming to tackle shortcomings surrounding services for sexual assault survivors. Calm/Storm invested in Leda Health‘s pre-seed round.

Madison Campbell’s startup Leda Health helps sexual assault survivors collect DNA after an assault by themselves with a simple testing kit. How her own traumatic experience led her to become a founder with the goal to transform the existing system of sexual assault prevention.

I am a sexual assault survivor. It happened in college while studying abroad. I felt so overwhelmed that I did nothing. I went to a pharmacy and dyed my blond hair black. I did not report it because I was terrified, in another country, and didn‘t know the healthcare or the legal system. For someone like me who grew up conservatively, it was a double whammy: oh my God, this happened to me and I was not even supposed to have sex before marriage. I am not alone in this. In the United States, 77% of sexual assaults are not reported.

“We must push for cultural change”

After the assault, I decided to spend the rest of my life making sure that survivors can secure DNA at home if they are too afraid to go to a hospital – making them feel empowered and allowing them to take control of the process. We must push for cultural change, not only in the US, but also abroad and across religions. Having a suite of products around sexual assault will help start that conversation.

With Leda Health, my co-founder Liesel Vaidya and I are bringing to market the first DNA kit for sexual assault survivors designed with self-use in mind. Our kit will include swabs to collect DNA samples from a variety of locations on the body to preserve time-sensitive forensic DNA. We are using tamper-resistant and tamper-evident methods along with encryption software backed by blockchain technology to document the chain of custody. Leda Health is also a platform where survivors can connect with other survivors and find advice, something we are pushing with our virtual healing circles that are supported by sexologists. Our vision is to prevent sexual assault from happening in the first place. The kit will function as a symbol of protection and, hopefully, as a deterrent to sexual predators.

I was on a very different path initially. My plan was to get my Ph.D. in space epidemiology while working with NASA. But in 2016, the budgets for NASA and research were cut, and great people lost their jobs. My dreams came crashing down and I dropped out of college. I slept on a friend’s couch in New York and then moved to London with my boyfriend. But I was in a funk. I had no idea what I wanted to do with my life. Eventually, we moved back to New York. At some point, my boyfriend made a joke, asking how someone could prove infidelity. Through research, I discovered that the test used to determine infidelity is identical to the one used for survivors of sexual assault. That was when I came up with the idea for our company.

Our first name was MeToo Kits and a lot of people got upset that a random 23-year-old created a cardboard box with the aim to transform existing systems of sexual assault prevention. We went through a big storm already in terms of publicity. There were newspaper reporters sneaking into my office, and we received death threats on Twitter as well as cease-and-desist orders from lawyers. Every day, I would wake to another tough letter and still go on because I believe what we do is good. We want to help sexual assault survivors on a global level because they are still being stigmatized.

Never before have individuals who have survived a sexual assault been able to test themselves in order to prove they were assaulted. That was the pivotal moment for me: realizing that we live in a world with so much autonomy, but we have not given autonomy to survivors who had to live through their worst nightmare. A traumatic experience can haunt you. Even worse, during the pandemic, sexual assault survivors were considered non-essential patients in America and taken away from emergency rooms because they were full of COVID-19 patients! And you had to factor in the risk of getting infected during an examination when going to the hospital.

“Entrepreneurs are martyrs in a way: we get ousted for our ideas”‍

The pandemic made people finally wake up to the fact that we have to offer sexual assault kits at home or else a huge population will be underserved. In five years, we are going to look back and think, why wasn‘t this a thing earlier? Why didn‘t everyone complain about this? Entrepreneurs are martyrs in a way: we get ousted for our ideas because we have them too early. The controversial part about entrepreneurship is that no one has ever dared to do this.

Leda is providing a rape kit and a holistic solution for sexual assault survivors, allowing them to take care of themselves when professional care is not accessible.